People of The Book
The Jerusalem Report
August 17th, 2020 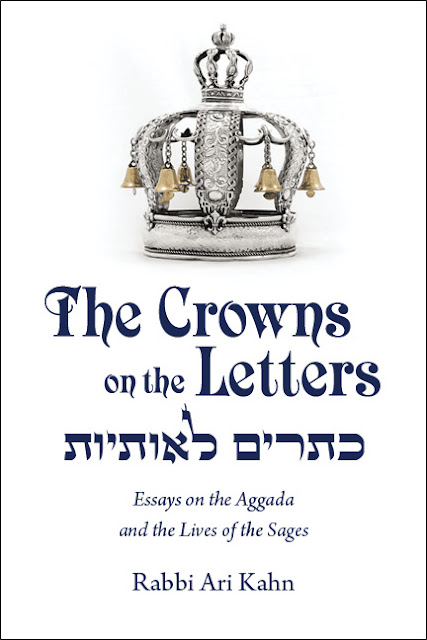 Mysterious magical characters; non-linear time; enchantment: To some readers, these concepts may seem to have been taken off the jacket of a new Bob Dylan album (back in the day when vinyl was ‘a thing’). For others, these hard-to-pin-down phrases describe the elements of midrash and aggadah that form a literary-philosophical world which, for me – and, I suspect, for many others - is a source of fascination, meaning, and holiness.

I have been exploring, teaching and attempting to illuminate the world of Talmudic narrative and allegory for some forty years, and recently committed to paper some of the core issues and concepts I have examined in that time. My most recently published book, “The Crowns on the Letters,” is a collection of essays on core issues of Jewish thought as they are expressed and distilled in the midrashic and aggadic sections of the Talmud. The process of translating my oral lectures into chapters of text has been enlightening, as the methods for engaging a live audience and explaining abstract concepts in the lecture hall, classroom or even the synagogue are only distantly related to the skills needed for clear and engaging writing.

Often, listeners get caught up in the improbability (or perhaps the impossibility) of the “stories” we study; they become sidetracked by the lack of feasibility that is inevitably the result of a purely literal reading, and risk missing the message our sages hoped to convey that lies just below the storyline.

A case in point is a delightful teaching, found in Talmud Bavli Menahot 29b, in which a confused Moses finds himself in the classroom of a later scholar named Akiva. The entire story is a non-starter for rational listeners and readers: Talmudic time travel is too much for them, and they dismiss the entire story, missing out on one of the most daring and fearless Talmudic passages I know. This “story” contends with some of the most serious philosophical questions and major tenets of Jewish thought: the authenticity of the Torah, and the question of theodicy. Sadly, the deeper message is often eclipsed by a simplistic, literal approach to the text, by failure to “suspend disbelief” and think symbolically, by focusing on the medium rather than the message. My goal, in the lecture hall and pulpit and as a writer, is to teach the language of midrashic and aggadic allegory that will enable others to access the deep ideas they convey.

This past year, in one particular lecture on the Moses-Akiva story, I encouraged my students to suspend their disbelief, and illustrated the concept by quoting Nobel Laureate in literature Shabsi Zisel a.k.a. Robert Zimmerman a.k.a. Bob Dylan. In an in-depth interview with the man known as “the poet of the sixties,” Dylan credited his art teacher, the acclaimed painter and sometimes-philosopher Norman Raeben, with helping Dylan break his writer’s block, which enabled him to create, among other works of art, his magnum opus “Blood on the Tracks.”

On the jacket notes to Biograph, Dylan alludes to the visual arts he learned from his teacher:

I was just trying to make it like a painting where you can see the different parts but then you also see the whole of it. With that particular song, that’s what I was trying to do... with the concept of time, and the way the characters change from the first person to the third person, and you’re never quite sure if the third person is talking or the first person is talking. But as you look at the whole thing, it really doesn’t matter.

On another occasion Dylan coyly tells of his teacher:

Certain that most of the people in the room had never heard Raeben’s name before, I gave my students some biographical details on the man who had this tremendous impact on Bob Dylan: Norman Raeben grew up in a home where stories were told and written.  Raeben’s father’s name was Solomon Naumovich Rabinovich, better known by his nom de plume Sholem Aleichem – one of the great Jewish storytellers of modern times, creator of Tevya the Milkman, the protagonist of “Fiddler on the Roof,” and many other memorable characters and unforgettable stories that have transcended borders and cultures due to their allegorical power.

Who would ever have imagined that the spiritual grandfather of “Tangled up in Blue” was the famous milkman Tevya?

I then urged my students to approach the text before us, the story of Moses visiting the study hall of Rabbi Akiva, as we would a work of art: A canvas can tolerate different time zones, it can portray timelessness. It can easily show us a middle-aged man, depicted in one section of a painting in his youth and in another section, in old age.  By learning to look at art we learn to suspend judgement; that is what makes it art. The same, I explained, is true of aggadah and midrash.

Moses can travel from Sinai to the classroom of Akiva, back to Sinai, and then back to the future to see the death of Akiva; he can return to the Heavenly Throne and question God Himself about the justice of it all. Moses can receive the Torah at Sinai, but at the same moment be unable to understand Rabbi Akiva’s lecture – which, Akiva explains, is based upon the teachings Moshe received at Sinai. Time is of no meaning; literal sequence is aside from the point. The passage addresses the very heart of Jewish masoretic authority, of the continuity and validity of Jewish Law, the basic concepts that enliven and empower Rabbinic Judaism. Anyone who dismisses the “improbable story” will have missed the treasure that lies beneath it.

Once the reader ‘agrees’ to participate in the aggadic text – that is, to set aside literalism and address the allegory’s message - he or she is faced with the seemingly impossible paradox it presents: Moses does not understand Akiva’s halachic teaching, yet Akiva explains that its source is none other than the legal tradition passed down through the chain of masorah, beginning with Moses at Sinai. This paradox is far more challenging than the small issue of time travel – and the answer Moses is given is even more challenging. Nonetheless, I told my students, the “story” itself provides us with the key; the text contains all the tools we need to understand the message. As readers, we must mine the story– its symbolism, its language, its references -to retrieve these tools.

Moses was not sent to Rabbi Akiva’s classroom “accidentally;” every element of the story is carefully crafted. Moses climbs Mount Sinai at God’s command; he stands before the Almighty awaiting the completion of the Torah and sees God affixing “crowns” - the scribal ornaments that adorn Torah script to this very day - on the letters. In his eagerness to receive the Torah, Moses wonders whether this ornamentation justifies the delay; he questions the necessity of the crowns. Rather than an explanation, he is told that in the future, one man, named Akiva the son of Josef, would “expound upon each mark heaps and heaps of Torah (law).”

The language of this response may hold the key to unraveling its paradox. The Hebrew phrase translated as ‘heaps and heaps’ – tillei tillim - is derived from the word “tel” (a common place-marker in Israel). In “The Crowns on the Letters,” I explain this key word-concept:

The Torah that Moses hears in Rabbi Akiva’s beit midrash is neither “new” nor “different”; it has its core in the teachings Moses heard at Sinai. This was implied at the very outset ... The choice of words is far from arbitrary: The word tillim is the plural form of the word “tel,” a mound created as successive generations build upon what their predecessors leave behind, heaping layers of life upon the strata laid down by previous generations. Akiva’s methodology did not abandon the chain of transmission that began at Sinai; rather, Rabbi Akiva performed “intellectual archaeology,” mining the depths of what he had received from his own teachers, uncovering and revealing the sources of the mesorah he received, tracing them back to Moses and the principles he was given at Sinai.

“The Crowns on the Letters” Page 76

Were we to imagine a graphic representation of this aggadic text, we would see that the two scholars can be joined on one canvas, despite the millenia that separated them in life, and the paradox is resolved: Moses does not understand the modern iteration of the laws, although Akiva sees clearly that their core principles were handed down at Sinai to Moses, and then to those who formed the chain that led to his own study hall. Akiva sees his role as a link in this chain, as an interpreter of the law who digs through the strata to reveal the bedrock upon which halachah is based. This is what God explains to Moses; this understanding, this approach to Torah, will be the legacy of Akiva. “There will arise one man, at the end of many generations, Akiva ben Yosef is his name, who will expound upon each mark heaps and heaps of Torah.”

That same Akiva begins his career as one of our greatest teachers and heroes, when he sees water penetrating rock. The trajectory of Akiva’s life is set in motion by his own ability to identify and interpret symbolism and allegory; he remarks that if water can shape stone, Torah – the solid bedrock of our lives – can most certainly shape our hearts and our lives (Avot d’Rabbi Natan, Ch. 6). Ironically, Moses is stripped of his role as teacher and leader when he strikes a rock rather than using words to satisfy the people’s needs for water (Numbers 20).

The separate stories of Moshe and Akiva are brought together by the symbols associated with their lives and legacies; their stories intermingle. Perhaps on a canvas their stories might be told through water and rock, rock and water – paradox and resolution, heaps of Torah law built on the scholarship of previous generations, all standing on the bedrock of what was given to Moses at Sinai. Canvas could surely tolerate the elasticity of time, place and consciousness as Moses moves back and forth, up and down, from heaven to earth, as he impossible becomes clear and the enchantment becomes reality.

Ari Kahn is an author rabbi, and teacher. He is a senior lecturer at Bar Ilan University. His most recent book, “The Crowns on the Letters: Essays on Aggada and the Lives of the Sages,” published by OU Press/Ktav Publishing House, is available on Amazon.